Every year I tell myself that I am not going to go overboard with the kids’ Christmas presents. And every Christmas Eve I panic because I think I didn’t allow Santa to bring enough. So then I run to Rite Aid (because it’s close and still open) and buy a bunch of crap that was “As Seen On TV.”  Why? Because I want the kids to have that initial reaction of, “oh my goodness look at all the stuff!” All that stuff is just for show. No one asked for it and no one plays with it after Christmas…mostly because the shit breaks after one use, but also because they could care less. This year I have started the same ritual. Santa and I had a talk and he is granting my 3 their wish for Electric Scooters.  But that one scooter does not fill up their Christmas chair. (Each kid has a spot in the living room where they have their stocking and Santa gifts.)  I can already see the writing on the wall. A Chillow is in everyone’s future. 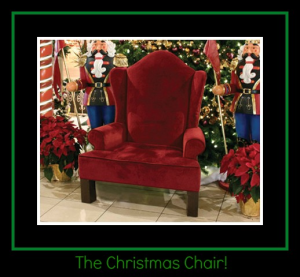 (This is not the real Christmas chair.)

But no one wants the Chillow! It’s just me! Me—> feeling guilty for not having more stuff in the Christmas chair. Me—-> encouraging the belief that presents are the reason for the season not baby Jesus in a diaper, not the spirit of giving, not spending quality time with family while singing Christmas carols and roasting chestnuts.

Now as I type this I am already anticipating the comments. Not real comments because I don’t get many of those. 😉 But thoughts. Thoughts like:

“Wow, she is one selfish bitch. I can’t believe she is posting about what her privileged children will be getting from Rite Aid on Christmas.”

“I don’t know what she is complaining about, a Rite Aid Christmas sounds great.”

“The only thing on my Christmas list is a Chillow.”

I understand that but for now, I’m not talking about that. We participate in the toy drives and adopt needy families. I’m talking about on Christmas day when the kids come down the stairs in anticipation of their own Christmas magic.  At that moment, they are just little kids who have been (semi) good all year in the hopes that Santa would reward them for their kind and generous nature. I don’t want them to be disappointed. I want them to be elated and amazed at their own good fortune. Hopefully an electric scooter, the Christmas story, and some hot chocolate will do the trick. But I’ll probably get the Chillow to be safe.